The Tax Cuts and Jobs Act which became effective on January 1, 2018, affects almost every area of income tax law, including charitable giving. An individual’s cost to donate money to charity has traditionally been reduced by the tax benefits afforded charitable deductions under state and federal income tax law. Forbes magazine reported that the marginal tax benefit of giving to charity has now been reduced by more than 25% in 2018 resulting in an increase in the after-tax cost of making a donation.

Let’s see how that can happen. First, income tax rates for individuals have been reduced therefore making all tax deductions less valuable. There is also a new limitation that caps the amount that one can deduct for state and local tax deductions to $10,000; these are called the SALT limitations. While not the subject of this discussion, the estate tax exemptions have been significantly increased thereby making it less important to have a charitable component of one’s estate plan. And finally, and very importantly, the standard deduction has been increased for individuals to $12,000 and for married couples to $24,000.

We all recognize that charitable gifts are and motivated not only by tax benefits but by philanthropic intent. Nonetheless, the changes in the new tax laws might discourage tax motivated charitable bequests. The reason this might happen is that the number of people that can itemize their deductions is going to be reduced as a result of the increase in the standard deduction mentioned in the preceding paragraph. It is estimated that the number of those being able to itemize charitable contributions will fall by more than half to somewhere around 16 million people. It is also estimated that the number of middle-income households (not easily defined) claiming the charitable deduction could fall by as much as two thirds to as low as just 5.5%.

Charitable deductions only create an income tax benefit if the taxpayer is able to itemize. The Tax Policy Center, which is part of the Brookings Institute, estimates the number of households claiming an itemized deduction for their gifts to non-profits from about 37 million to about 16 million in 2018. There are estimates according to the Tax Policy Center that charitable giving in 2018 could fall by as much as $12 billion as a result of the new tax law. 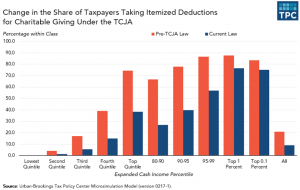 Fortunately, there are many good options still available to donors. One such option is for people over 70 1/2 to be able to make a direct transfer of IRA balances up to $100,000 per year to charity. The direct IRA transfer to charity is particularly attractive to someone who would have given the charity a donation even if they could not have done it from their IRA. The added benefit of this strategy is that the donation does count toward satisfying required minimum distributions and may result in the donor achieving a lower tax bracket.

Because of the increase in the standard deduction and the increased difficulty in being able to itemize charitable deductions, a strategy being discussed is one where the donor or lumps together or “bunches” charitable deductions in a particular tax year. The bunched amount could then be donated to a donor-advised fund, and the donor could recommend to the charity distributions to that fund over a number of years.

Nonprofits need to educate donors on the IRA and bunching techniques as well as some trust options that may be available to donors. Perhaps a donor might want to use a charitable remainder trust to make a contribution of appreciated property? In the past, the tax benefit of such contributions had been limited to 50% of adjusted gross income. Under the new law, there is a favorable provision that has allowed the cap to raise to 60%. Trusts are not subject to the standard deduction limitation in order to itemize for charitable deductions so use of a trust, whether or not a charitable remainder trust, might be a very good way for a donor heart to take full advantage of a charitable deduction that otherwise would be lost because the donor would not have enough deductions to go over the newly increased standard deduction.

We would like to work with non-profits to come up with good, easily understandable strategies that will help their contributors not only continue to donate but perhaps increase their donations if showing creative ways to be able to deduct it. Our experience is that donors are more likely to writ a larger check if they can be shown in not only the emotional gratification but also how to successfully navigate through this new tax law maze.[/column]

Are you an advisor? Subscribe to our dedicated Newsletter today.

As an advisor you need to be up to date with the latest Estate Planning updates and news. We have set up a special newsletter just for you. By joining our newsletter you will receive all this information directly into your mailbox. All content is provided by qualified attorneys from our Asheville and Hendersonville offices.

You have Successfully Subscribed!

Stay up to date with the latest Estate Planning updates and provide the best advice to your clients. Opt-in for our advisor dedicated Newsletter.

You have Successfully Subscribed!

Don't miss out on our Estate Planning Advice!

Join our mailing list to receive our monthly newsletter with the latest updates and Estate Planning news directly into your inbox. You'll never miss an important information anymore.

You have successfully subscribed to our Neswletter